Brothers – give us a hand

What a beautiful world – thanks to you, my friend

dying. Maurycy breaks out laughing. He wants me to run with him all around the room.

Ignacy raises his hand. He feels the light. There’s a hope. I’m getting up. I am being

The day Ignaś was born. And then, Wednesday, three weeks later.

Supposedly there’s something wrong with the child. I don’t know what? I’m suddenly

a bundle of nerves. What is wrong?

Two years since Ignacy’s arrival. June. Ignacy is sick. His

brain is sick. He keeps receiving steroids. He’s so lovely. I can’t imagine my life

without him. Tomorrow I’m giving birth to his brother. I want him so much to have a

brother. I’ve been living in fear. What happens when I die? Who will take care of him?

Six months since Ignacy’s  brother, Maurycy was born. He is also

ill. His brain is ill. He’s epileptic. Apparently he can’t see, can’t hear, will not be able to

walk or move at all.

I’m overwhelmed by a horrible

Sometimes I close my eyes, cover my ears to see how it feels. How does it feel?! What

is it like?! Not to be able to move, to see, to hear, to have everything in ‘off’ mode. How

Light, the rays of sun are falling from the sky. Ignacy is raising his hand. He’s letting me

know he can feel this light. Can he see it? Then, he’s raising his other hand. Maurycy has to

use his legs, instead. And I’m worried again what will happen if I die.

Maurycy is breaking out laughing. He wants me to run with him all around the room. To

jump and dance. He’s a miracle. And he’s right’ this life is

It’s almost six years since Maurycy was born and

Ignacy is over seven years old.

I don’t seem to know when the day ends and night starts. I’m getting

hours, times mixed up, the reality gets blurry. Did that happen today or, was it

yesterday? This cry, this scream, this wail. A pain, a torment. Not mine, the pain of my

child. His brain is crying. While the other boy is twisting up in a grimace of pain, is he

suffering, and how much is he suffering?… Such a  dreadful night.

At dawn, everything’s fallen into sleep. Both brains are struggling. But

their faces are smiling, their eyes look ready for life. I’m totally

collapsed. Then I say to myself: I am tough, I’m made of stone, a piece of rock. More

recently, I learnt to cry. My tears keep falling, they feel like pebbles. And then

reality strikes. She’s with me. A dedicated friend. Screaming into my ear! Cry

my rock, my stone, my tough mother! This is your life!

How to get a sponsor?

Here He is, here’s the sponsor! They will give us a hand, hurray, hurray! My

heart’s leaping with joy. They’re saved! The children. The sick ones.

For the time being we have everything. But the sponsor

does his maths. I can see they do their best. They keep bargaining, keep counting.

They say they  want everything that’s best for the kids. How can I help?

What help do you need the most?

They are proud to help such a charitable

cause, and feel good about all great work they do.

This will only work if done my way. Otherwise, I won’t give anything. I am the one

who knows everything. So, how to get a sponsor?

are heartbroken and generous with money.

After all accounts have been finalised, coordinators,

band and others have been paid, there is ‘real’ help for a sick child.

50 PLN  came, so humble, and settled quietly in the bank account. So

it quietly sat and waited. And then 0.84 PLN from Tczew,

and then 1,56 PLN from Warsaw. Like cent vs Dollar,

contributed, and a decent amount was raised in a few months. So the sick

kid could go to places, could get some use from that.

Tell me what it’s like? My friends and my friends’ friends ask me. But what? – I ask.

She’s hanging about. Keeps frightening us. Yesterday she made Ignacek choke. A

nasty one. Takes my strength away. And then she chokes me and finally strangles me. The

ambulance comes, we are rescued. The little one, the tortured and scared one. So much

suffering in one little body. But he won. He didn’t suffocate!

There are still plenty of lifeaffirming people in this world. The wicked force  that

tried to choke Ignacy, falls down, getting bashed right in the face. The

paramedic runs in with all his love. He brings breaths.

Meanwhile, Maurycy grew up, he’s ‘running’, slides on his back  around the room.

Clapping his hands and putting his legs around his neck. He really loves sitting in a

My work colleague is jealous about me being a mother of two disabled boys. Oh….! She says:

You’re taking days off again. I wish I could do the same… Well, we mothers of disabled

children, are the Lucky Ones.

We’re spending our vacation at home. Maurycy has had epileptic attacks and gum

inflammation. Before it turned out he’d grown enormous sores underneath his lip, he’d

poked  his eye with his leg. Yes, I must admit, Maurycy is a sporty kid. He can do a

lot of harm to himself just using his leg. He can’t kick a ball but he’s perfect with kicking his

eye. Finally, it took three people to watch out for him so he wouldn’t hurt his eye. We’re still

waiting for the surgery. Maurycy had to suffer for a month before we discovered what was

wrong. And this seems to be the pattern. He can’t communicate anything himself.

His mouth is shut. Despite his cries and shouts being so

Ignacy spends most of the time with his hand. He learnt to watch. But he can see only his

own fingers since he’s afraid to look at anything else. He has  long, silent talks

with his hand. And there’s only him who can hear what his little fingers answer. Sometimes

it’s so funny that both, Ignacy and his hand are having a laugh. But whenever I

come to join the spell gets broken. I have to leave and Ignacy quietly confesses his secrets.

He also uses his hand to twiddle his thumbs. Besides this, he’s can do nothing.

boy. This is the way Ignacy’s hand is.

When somebody comes up to me to ask for 2 zloty for bread, sometimes I can’t stand it.

Man, you’ve got a pair of fine hands, fine legs and a head- I say. But, on the

other hand, I do admire how motivated they are. Both, Ignacy and Maurycy have all of those

– legs, hands and heads, and at the same time they have nothing. And I cannot beg.

My sons cackle, make ‘googoo’ noises and other, equally unusual sounds. But to us, their

parents, they don’t sound abnormal, we don’t hear them that way. We use these sounds to

communicate with one another. Sometimes we even forget about that. Once, at the store we

tried to get juice. First, dad asked Ignacy about the juice, making a throaty sound, and then

turned to the shop assistant. The woman called us brainless to teach disabled kids that type of

Maurycy’s and Ignacy’s Dad is a photographer. But we don’t have too many pictures

of our boys. Maybe, because we don’t feel like reporting and following their disability. The

older they are, the sicker they get.

Both boys are waiting for specialist corsets. They cost a fortune but they sound fabulous. We

want to get them orthopaedic corsets made of chromed metal and leather. And also helmets.

Orthopedic shoes. They will look like Ninja turtles or robots from futuristic 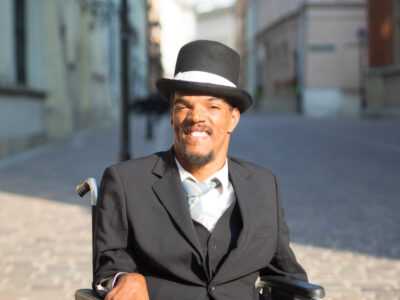 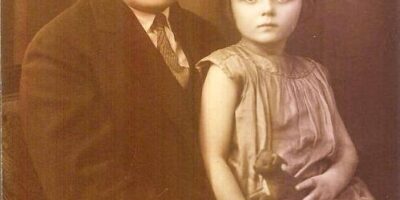 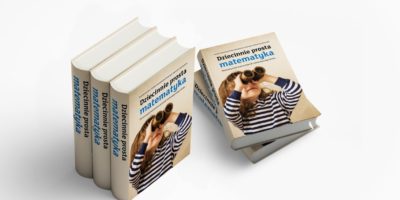 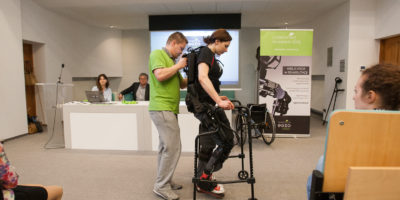 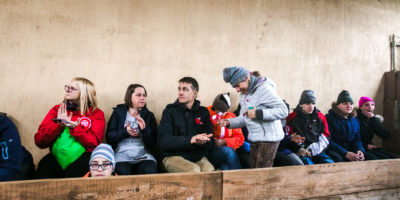 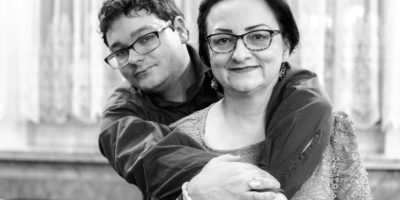 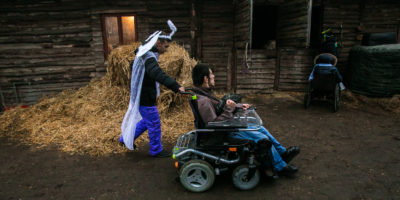